This app was available for iPhone, iPad, and Android!

A brief introduction to Appreciative Inquiry, which is a perspective on the world that invites users to see themselves and the world through an appreciative or valuing eye.  Users will learn how language, questions, and stories shape destinies.

This app has come about by public demand after the author’s success with her iPad app, Embracing Change, for which there have been thousands of downloads and reached Number 2 on iTunes in the Business Category.

“When will you do a version for smartphones?” was the request.

The app allows users to practice the appreciative mindset through images, audio, and notes: Users can upload their own photos to the App’s Facebook’s Page with their stories, create audio recordings of their own insights, as well as annotate their thoughts using the app’s notepad.

1.) Learn to Focus on the DOs, and let the DONTs take care of themselves

You go into a team innovation meeting, and spend the first 30 minutes analysing what is wrong with the current state.

Has this happened in your team? Does this create the right environment to innovate in? Observe the mood, energy, body language of such meetings… 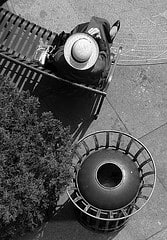 Innovation is about what is possible, about inspiration, about a positive mindset, and the language we use directly impacts our ability to contribute. Gripe sessions get in the way. Positivity engages.

Broadening our horizons to focus on the possible rather than on what constrains us is difficult enough without focusing on what is wrong with the current state, and it requires a disciplined use of affirmative, additive, positivie language. What we focus on grows, and if we focus on all that is wrong with the current state it is much more difficult to shift to thinking about what is possible.

Susan Mazza at Random Acts Of Leadership recently had an (as usual) inspiring post about self-destructive behaviors of people trying to protect their jobs in this economic downturn, and she suggested 5 things one should STOP doing, as well as 10 behaviors to START doing… I absolutely love her post, AND I feel the language she uses has the potential to be even more powerful by primarily focusing on what to START doing, and allowing STOPS to take care of themselves.

2.) Learn to Reframe your Language

In fact I think that reframing our language has tremendous potential, let’s take an airline example:

Would you rather go into a meeting where the agenda is to discuss “Lost Baggage Customer Complaints”, or would you feel more energized to discuss “Achieving Optimal Customer Arrival Experience”? A successful outcome of creating an optimal customer arrival experince would almost certainly address anything that would need to be done to eliminate lost baggage.

Develop the skill to stop and deliberately review your language, emails, agendas. Ask yourself: How can I reframe this to shift the focus on the positive, the strenghts of our organization, colleagues, resources? Will my language engage people? Will it inspire positivity rather than focus on something negative?

In “Six Thinking Hats” approach there is a view that “venting” is a catharsis necessary and useful to move forward: I disagree. Rather I agree with Peter Drucker‘s philosophy on the role of leadership as cultivating one’s strenghts in a way that makes ones weaknesses irrelevant. As in the airline example, issues that need to be addressed or fixed will still allow discussion, disagreements and a certain amount of “venting”, but it should not be allowed to have central focus, and will almost certainly be seen as a negative once everyone is already focusing on how to move forward.

Our reality is shaped and co-constructed by our perceptions, emotions and our language. Recognizing that positive language yields positive emotions can be a great contributor and enabler in the innovation process. Therefore, learn how to harness the power of positivity, in order to translate it into language we use constructively when dealing with each other.

Robyn at pursuingpassions.com writes on the Practice of Positivity:

Positive emotions increase our thought-action repertoire creating a broadening effect that opens us up to generativity, to creativity and to each other.

5.) Develop and  cultivate a “Yeah, and…” perspective, for yourself and your team

Gary Bertwhistle in his post over at Innovation Tools perfectly illustrates how language is important to promote and cultivate good ideas:

While working in New Zealand recently, I met the CEO of a large manufacturing company. Although he agreed with my philosophies around leading innovation, he was one of those “yeah but” guys.

As I presented my keynote, he would very politely ask questions which always began with “Yeah, but…” After he’d done it a few times, I shared with the audience an intriguing part of leadership that starts with language. I challenged the audience (and indirectly this CEO) to answer the question – are you a “yeah but” guy or a “yeah and” guy?

You see, if whenever you are reviewing a new idea, and the first thought that comes into your mind is “Yeah but…”, you’re basically putting a full stop straight on the end of the idea.

Do you have examples of where language played a part in setting the right tone for a meeting? Where reframing the language of the  agenda resulted in a more energized and productive discussion?

I’d encourage you to read an excellent post on “Are You StriDing or StriVing?” by Susan Mazza on her blog “Random Acts of Leadership“.

Much has been written about flow and being in the present moment. I have read a ton of it, searching for keys to experiencing more flow in my life and work. I can work so hard at times that I exhaust myself in the process. There have also been too many times in my life when I have worked like crazy and not been particularly satisfied with the outcome or the journey. Does this sound familiar?

The Mountain Bike Way of Knowledge – by William Nealy

I have a contribution from the sport of Mountain Biking, my own experience and having gotten others started in the sport: There usually is a natural progression from incompetence to competence, and eventually to being able to achieve a state of flow, typically referred to as the “Four Stages of Competence” , here’s the MTB version:

Being an authentic leader has much in common with achieving stage 4 in your life and work: On our way there it is helpful to remember that one cannot get there without first passing through stages 1-2, and therefore falling a lot!

PS Wikipedia suggests that a fifth stage should be added, called “Reflective Competence”