Some context about risk-taking

The press release (full text here) has been met with a lot of buzz on Twitter and a number of review sites.

At Polymash we feel the Crankamacallit is interactive story-telling with a difference, and I wanted to provide a little context as to why and elaborate a bit more on the following part of the release:

This iPad app for kids takes some risks that set it apart from most children’s stories. The developer took a page out of game design by utilizing a first person perspective in interactivity, animation and illustration. Interactive elements are intentionally not highlighted nor easy to find. User testing feedback revealed kids “get it” and show their parents the functionality, not the other way around. Another risk was to use the recently released Adobe CS5.5 Digital Publishing Suite platform for a children’s book, and to extend its core functions with HTML5 and JavaScript coding. The developer participated in the alpha and beta testing for Adobe beginning in the summer of 2010, and with this app shows that the platform can be used for much more than just the digital magazines it was created for.

The buzz about iPad usability

I  come from a corporate IT background in user experience and usability engineering. And recent buzz complains about the lack of usability  standards on the iPad (based on a report by the Nielsen Norman Group, an authority in the field) Here is an example on the Huffington Post referring to this study. They point out that because of a lack of standard user interfaces for the Pad, interactive elements and the overall user experience is  not always obvious and predictable.

So, can “lack of usability standards” ever be a good thing? 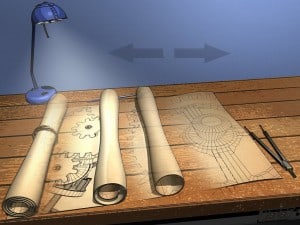 While this lack may be a frustration to grown ups, our own usability studies have shown that for kids this has not been an issue.

Why? My theory is that unlike grown-ups, kid’s egos are not as involved or hurt by having to explore and hunt for functionality, and they delight in figuring it out. We’ve often witnessed grown ups pick up an iPad for the first time with a sense of trepidation and fear of not quite knowing how to use it, but kids immediately start to experiment and play. And I think as grown ups start to understand the device, they too delight in their “discoveries”.  To me, this sense of discovery creates much deeper engagement, and the many brilliant app designs unencumbered by any usability standards illustrate the magic of the iPad.

So I for one do not necessarily look forward to seeing universal iPad usability standards develop. So unlike many kid’s apps we see, for our interactive children’s story we have intentionally not been too obvious about brightly highlighting interactive regions, providing instructions or hints. Our testing with kids proved that they “get it” and are able to show functionality of the app to their parents, not the other way around.

Here’s a grown up’s (unsolicited) review on iTunes that illustrates the point:

“The first time I went through this book on my iPad I missed 90% of it and I thought, “well, this is pretty lame”. Then my 3 year old daughter got ahold of it and showed me what was possible. Even without having seen the rest of it, what I did see initially was visually stunning. The rest of it just made it worth the $5. It’s not a book of puzzles, it’s a book that tells a story (obviously), and invites you to explore the world created so cleverly by the graphic artist. Don’t leave a single stone unturned when you go through the book, or, give it to your 3 year old and sit back and be amazed. “